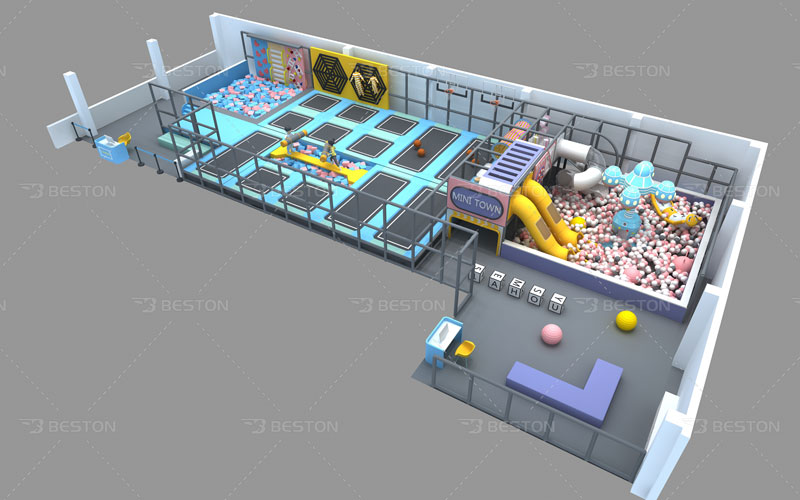 We have built hundreds of indoor projects in different countries and areas around the world. Here is one of the projects from us! Beston has installed two indoor playgrounds in the Hamad International Airport in the Qatar to welcome the upcoming Qatar Football World Cup! Check here for details about the project!

We are investors from the Hamad International Airport in Qatar. The project is in the new and old airports, which includes two sets of indoor soft play equipment and interactive projection. Now the project has been put into operation and we felt satisfied with the project customization, product quality, on-site installation, as well as our services and supports. We are looking forward to cooperating with Beston again in the future!

Brief Introduction of Indoor Project in Qatar
• Get to Know the Project: The project is located in the two international airports in Qatar, which is under construction. And the indoor VR and video games have been confirmed and they contacted us to buy indoor playgrounds and interactive projections for the two indoor projects in the airports.
• Initial Demands: The two indoor fun centers have covered about 700 square meters and we have installed the 276 square meters space theme indoor playground equipment, 287 square meters morandi theme indoor soft playground, and interactive projection. Our customers choose to invest this indoor park project to welcome the Football World Cup originally.
• Product Purpose: Later on, the indoor fun centers can entertain the passengers near the airport or passers-by and also bring much more profits for the investors. Now, the indoor fun centers is in operation and it is welcomed by tourists there. Contact Beston for more details about the project here!

Project Process of Park Project in Qatar
• In July 4th, we received the inquiry from our customer who sent us some client feedback picture.
• In July 5th, Beston started to communicate with our customers’ designer about the 2D park planning.
• In July 14th, the 2D park layout was finally confirmed with our customers in Qatar.
• In July 15th, we received the intention money for the design fee and started the 3D indoor park design.
• In July 25th, the 3D design of indoor fun center was eventually confirmed after six cycles of design and modification.
• In July 29th, Beston and our customer in Qatar signed the contract and confirmed the order.
• After receiving the advance payment in August 1st, we began the production until August 22nd.
• The delivery is completed on August 23rd, and the goods arrived at the port and complete the custom clearance around September 20th. And all three containers arrived on September 25th.
• The installation guidance and on-site installation were mainly in October and November.

Confirm the Demands for Customer in Qatar
• Qatar customer found Beston from website and they initially need the designed indoor playgrounds. At first, our customer collected some pictures online and wanted to obtain the quotation from us. Besides, they also asked about whether we could deliver the products they order in two or three weeks.
• After communication with the customer in Qatar, we got to know the overall layout of customer’s site as well as some potential demands.
• During the communication, we gradually knew this is a whole project and they have confirmed most VR games and video games when they found us. At that time, they just planned to buy indoor soft playgrounds and interactive projection.
• As we all know, the indoor playground itself is a customized indoor project and Beston can customize it to satisfy our customers’ needs, such as landing site, themes, requirements, etc. Finally, our customer confirmed their order: two sets of indoor soft playground and 5 sets of interactive projection.

Indoor Soft Playground Design – Solution Customization
• As for the project customization, each indoor playground design is tailored separately according to the site, budget scope, tourists’ preference, themes and other demands.
• According to our investigation, our design team will customize the indoor soft playground which can guide the position of the project and the applicable crowd.
• As the indoor playground project will be placed in the international airport, Beston recommended the medium to high grade indoor playground equipment for our customers. As for this allocation, the whole project and our customer’s corporate image of our customers will be well represented for the tourists in the indoor fun centers. Here are the morandi and space theme indoor soft playgrounds from Beston. Here are the park solutions!

Client Feedback and Further Cooperation with Qatar
• As for the client feedback, our customers in Qatar gave us high evaluation about our products and services.
• They are satisfied with our professional service, including the two popular designs: morandi and space theme, product quality, quality and environmental materials, delivery service and so on.
• Especially, our customer felt quite satisfied with the overall installation. Beston has assigned our professional engineers to our customers in Qatar to assist them install the installation.
• Beston hopes to build a fun and magic world around the world. All customers worldwide can feel free to contact us and Beston will provide professional and all-round services and supports to skyrocket your indoor and outdoor park business.
• Most of our regular customers will contact us directly when they need us and Beston is also looking forward to building further business cooperation with our Qatar customers.
• No matter the new customers or regular customers, we welcome anyone who have demands to build an indoor and outdoor park project to contact us freely. After cooperation, you will recognize that Beston is your ideal selection to start your par projects!

“In order to help our customers for their park business, we will provide a series of services and supports, such as Project Layout and Consultation, Project Customization and Solution, Construction Proposal and Planning, Installation and Debugging Guidance, Regular Inspection and Client Visit, and Project Operation.”
Beston